Uruguay & Guatemala pushes on with legalization, the US escalates crackdown, Oregon MJ qualifies for November ballot, Drug abuse down 50% in post-decriminalization Portugal

This week brought goods news and bad news for drug policy reform in the US and in Latin America:

The Uruguayan government is getting ready to send its marijuana legalization proposal to parliament for debate. That’s for the good news; the project is plugging along. The bad news is that so far only 24% of the Uruguay population support the proposal; President Mujica would like to get 60% approval to finalize the proposal, counting on widening support as the debates unfolds, a steep uphill educational battle ahead!

President Mujica announced today that he will tour the country to explain his proposal, emphasizing that his objective is to reduce drug-related crime. http://www.infobae.com/notas/659981-Pepe-Mujica-ratifico-que-buscara-legalizar-la-marihuana-en-Uruguay.html

Uruguay needs our support. Underneath is the link to the petition in support of the marijuana legalization project. Share on social networks and email. http://www.world-war-d.com/2012/06/22/petition-in-support-of-the-controlled-legalization-of-marijuana-in-uruguay/

In Guatemala, President Perez Molina is moving ahead. On July 3, he became the first serving head of state to sign the Beckley Public Letter, calling for a paradigm shift in drug policy, joining seven former head of states Kofi Annan, and a slate of high-profile personalities. President Molina also launched the Beckley Foundation Guatemala, in order to assist in the development of new and more effective drug policies. Guatemala wants to build the case for a regional coalition for drug policy reform, a long a tedious, but necessary process. http://www.beckleyfoundation.org/2012/07/02/president-otto-perez-molina-launches-beckley-foundation-in-guatemala/

At the impulse of Guatemala, drug legalization will be discussed in more details at the upcoming SICA meeting of regional heads of states. http://m.laprensagrafica.com/2012/07/16/legalizacion-de-drogas-de-nuevo-a-debate/

In El Salvador, where the Catholic Church is a powerful force, the Archbishop of San Salvador, José Luis Escobar, called for a deepening debate on legalization during a press-conference on July 8. http://www.s21.com.gt/internacionales/2012/07/08/aboga-debatir-despenalizacion-droga

Marijuana legalization on the ballot in Oregon, Fed escalates crackdown on medical mj

In the US, Oregon is the third state to put a marijuana legalization initiative on the ballot in November, joining Colorado and Washington State. http://www.katu.com/news/local/Marijuana-initiative-qualifies-for-Oregon-ballot-162446216.html

Mayor of Newark, New Jersey, Cory Booker joins a small but steadily growing group of vocal anti-drug war politicians. It looks like anti-prohibitionism is not such a vote-buster anymore. http://www.huffingtonpost.com/2012/07/16/cory-booker-drug-war_n_1676008.html

But Obama doesn’t seem to be getting the message, as medical marijuana crack-downs continue and even escalate, with Harborside, the largest dispensary in the world, despite the protests from Oakland city leaders. It is very hard to figure out why Obama, an avid pot smoker during his college-years, embarked on such a losing proposition. The crack-downs will not gain him any support in the center, while it certainly demobilizes and antagonizes some of its most faithful supporters, youths and liberals, who gathered in droves to support him in 2008, but will stay home next November. http://www.huffingtonpost.com/scott-morgan/obama-marijuana-harborside-health-center_b_1678701.html

Ask Obama to leave medical marijuana alone, as he promised in 2008: http://www.whitehouse.gov/contact/submit-questions-and-comments

And in case you needed it, here is another illustration of the total idiocy of prohibition: http://news.nationalpost.com/2012/07/13/mexican-drug-cartels-spreading-influence-graphic/

Meanwhile, Portugal has seen a 50% drop in drug abuse since the decriminalization of drug use and widespread adoption of harm reduction measures in 2001; drug-related crime dropped even further. http://www.forbes.com/sites/erikkain/2011/07/05/ten-years-after-decriminalization-drug-abuse-down-by-half-in-portugal/. If you read Portuguese: http://www.cmjornal.xl.pt/detalhe/noticias/nacional/saude/a-toxicodependencia-esta-a-diminuir  For more detailed analysis: http://academiajurisprudenciapr.org/wp-content/uploads/2012/03/Puerto-Rico-Marzo-06-2012.pdf. Need more evidence than prohibition doesn’t work?

And in case you needed it, here is another illustration of the total idiocy of prohibition: http://news.nationalpost.com/2012/07/13/mexican-drug-cartels-spreading-influence-graphic/

Mark your calendar and get ready to participate in what could become one of the largest event for drug policy reform: Javier Sicilia and Mexico’s Movement for Peace with Justice and Dignity will lead a caravan across the United States this summer, calling for an end to the drug war. The caravan will begin in San Diego this August and will visit two dozen U.S. cities on its way to Washington, DC. http://www.globalexchange.org/mexico/caravan

Uruguay needs our support more than ever. Share on social networks and email. http://www.world-war-d.com/2012/06/22/petition-in-support-of-the-controlled-legalization-of-marijuana-in-uruguay/

Obama needs to hear from you. Ask him to leave medical marijuana alone: http://www.whitehouse.gov/contact/submit-questions-and-comments

Stay tuned and keep up the fight. Thank you for your support.

Become a better informed activist and support global drug policy reform! I do not ask for donations, I invite you to order a book filled with valuable information.

If you agree with our views, please share this message to support our cause. Send this message to at least 5 of your friends, post it on social networks, on your blogs, etc.

Following the announcement on June 20 of a project to legalize and control marijuana in Uruguay, a vigorous debate has been started with proponents and opponents furbishing their weapons. The initial project of creating a national registry of users seems to have been shelved, and the idea of state-run production and retail seems to have been ruled out in favor of closely monitored private businesses. A proposal for legalization of cultivation for personal use might be folded into the new legalization proposal.

“The most important is to have a debate; this debate will take place until the law is approved, and will keep going after that, as we will need to regulate” declared Julio Calzada, secretary general of the National Drugs Board.

The international media has been generally supportive and the news have been welcomed, with the Time wondering if the rest of the world should follow.

Not everybody is pleased of course. Yury Fedotov, executive director of the UN Office on Drugs on Crime told reporters: “Should it happen of course that would be a serious violation of the Single convention and Uruguay is a party to this convention… I’m also aware that the President of the International Narcotic Control Board is planning an urgent mission to Uruguay to discuss the situation with the authorities of this country.” There is no official reaction from the US administration; drug czar Gil Kerlikowske has remained silent so far. While Guatemalan president Perez Molina warmly greeted the news, Colombia President Juan Manuel Santos, who had appeared to be favorable to open drug policy debate, was highly critical of the Uruguayan move. The Uruguayan debate must be followed closely in neighboring Brazil and Argentina where a debate on drug policy in ongoing, with Brazil scheduled to vote in July on decriminalization of possession for personal use of all drugs.

Uruguay needs our support. If you haven’t done so yet, I urge you to sign the petition in support of the marijuana legalization project in Uruguay.

If you signed already, help to promote it. Share on social networks and email.
http://www.world-war-d.com/2012/06/22/petition-in-support-of-the-controlled-legalization-of-marijuana-in-uruguay/

We need a success story in MJ legalization and Uruguay can be it. They will get a lot pressure from the UN and the US government. Let’s give them support from people from the US and everywhere. Uruguay is opening the gates and can be the very first of many. Brazil and Argentine have been debating their own drug policies for a while, they could be next. This could be the beginning of a domino effect. Uruguay is calling on the international community to consider marijuana legalization. Let’s respond to them.

In other parts of the world:

Guatemala seems to get ready for a major announcement about drug policy reform. I will keep you posted. It is time to revive our Guatemala petition http://signon.org/sign/support-guatemalan-president that had been dormant since the April 14-15 OAS summit. Please sign it if you haven’t done so, and start spreading it around you. We should have more news next week.

Governor Cuomo’s marijuana decriminalization bill was killed by his GOP opponent in NY State, but Rahm Emmanuel in Chicago handily sailed his own bill through. This would be relatively insignificant if Chicago was not Obama’s political base and if Rahm Emmanuel had not been Obama’s first chief of staff, almost his right harm. Now that his buddy Rahm Emmanuel decriminalized MJ in Chicago, and fresh from his SCOTUS healthcare victory, will Obama finally have his Marijuana moment? http://www.guardian.co.uk/commentisfree/2012/jun/13/barack-obama-marijuana-legalisation-election

The International Conference of Ministers of Foreign Affairs and Heads of Specialized National Agencies Against the World Drug Problem was held in Peru on June 25-26. See also http://www.canzarperu2012.com/

President elections will be held in Mexico this coming Sunday, July 1. All three major candidates have stayed away from the drug war issue throughout the campaign, avoiding the topic like a hot potato as the cartel violence keeps tearing the country apart. As the PRI who ruled the country for 70 years gets ready to regain the reins of power, will it resume its cozy relationship with the drug cartels? http://www.guardian.co.uk/world/2012/jun/23/mexico-elections-drugs-war 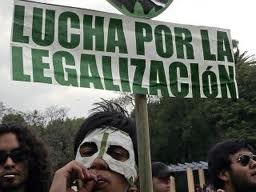 Please add your name to support marijuana legalization in Uruguay, and click to sign at the bottom of the form.

Pedro Bordaberry, @PedroBordaberry, President of the CEN colorado, was minister of Tourism and Industry in the Government of Jorge Batlle, the first head of state in the world to call for the legalization of all drugs in 2000, shortly after taking office.

Learn more about the proposal: http://www.presidencia.gub.uy/wps/wcm/connect/Presidencia/PortalPresidencia/Comunicacion/comunicacionNoticias/gabinete-seguridad-presento-paquete-15-medidas-promover-convivencia-ciudadana