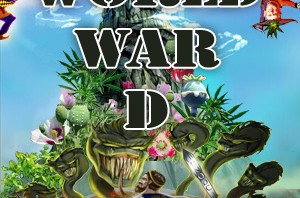 Readers are talking about “World War-D”. See what they have to say

Grady Harp, November 12: Looking at the Drug War Face On

Alrey4la: “ I just wish policy-makers would put aside their moral posturing and take the time to read this thorough and rigorous treatise… I have read many books on the topic, but if I had to recommend only one, this would be it. ” | 4 reviewers made a similar statement

JC: “World War D is a complete history of drug use, abuse, and policy. If you have not read any other book on this topic but have an interest, this is the book. Mr. Dhywood is like a Mike Wallace on steroids seeking facts and asking the right questions. The material presented is well ordered, showing the naked truth about who profits from the drug trade under the current prohibitionist laws, and the harrowing consequences to human beings throughout the planet. Finally he presents a list of options for a post drug war society with real and humane benefits for everything affected by the current system. A must read for anyone in the education, social services or legislative fields worldwide with an interest in truth and solutions. On the downside, some chapters would have benefited from the inclusion of a glossary of terms for anyone interested in the subject without basic knowledge of brain function. Highly recommended. ”