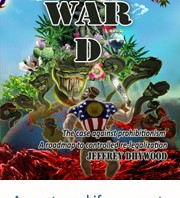 Reading World War-D gave you all the information you need to truly understand the issues revolving around illicit drugs and psychoactive substances. This is just the first step. If you are now convinced of the utter failure of prohibitionism, if you believe that controlled re-legalization is the only viable option, then it is time to move into action. Lethargy and apathy are not an option.

You can either throw your support behind one or more legalization-advocacy organizations.

Or you can participate in some of the on-going campaigns that have been launched around the world. World War-D is launching the Calderon-Santos Initiative for the creation of a Global convention on Psychoactive substances. The objective of such a convention would be to establish global protocol for the controlled legalization of currently illicit drugs.