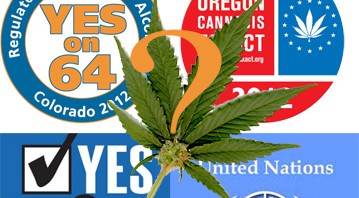 A landmark victory of marijuana legalization in Washington and Colorado will put internal & external pressure for drug policy reform on the US and weaken its hand with its restive Latin American allies.

After declaring in 1971 “We must wage total war against public enemy number one in the United State, the problem of dangerous drugs”, President Richard Nixon prematurely claimed victory On September 11, 1973, “We turned the corner on drug addiction in the United states. Drug addiction is under control.” Almost 40 years later, we might indeed be turning a corner in the war on drugs, though not quite the corner envisioned by Nixon, as 2012 is poised to enter the history books as a turning point in the failed war on drugs, and will hopefully signal the beginning of its unfolding.

Discontent about the failed war on drugs policies has been brewing for quite a while, especially in Latin America, but outside of that region, the debate rarely reached much beyond academic and activist circles. Things changed in June 2011 when drug policy reform grabbed the headlines across the world for the very first time with the publication of the Global Commission on Drug Policy Report. The report was signed by an impressive slate of prestigious individuals including seven former heads of state and the former UN Secretary General Kofi Annan, and was a seminal event for drug policy reform. Another seminal event, The Merida Declaration on December 6, 2011, went virtually unnoticed by the media and drug policy experts alike. Issued at the Tuxtla Dialogue and Agreement Mechanism in Yucatan, Mexico, the declaration was signed by eleven heads of state and high-level representatives of Central America and the Caribbean, including Mexico, Colombia and Chile, and asked “consuming countries … to explore possible alternatives …, including regulatory or market oriented options.”

2012 started with a bang when retired right-wing general Otto Perez Molina, newly elected president of impoverished Guatemala, rattled the world and instantly placed his country on the map by declaring the war on drugs a failure and forcefully advocating legalization. Guatemala is one of the world’s worst-hit countries by narco-violence, together with its unfortunate neighbors, Honduras and Salvador, and recently emerged from a decades-long brutal civil war.

Perez Molina has been unwavering ever since. He brought the drug legalization debate to the April Summit of the Americas, a gathering of all heads of state across the continent, from Canada to Tierra del Fuego, except Cuba (banned by the US). More recently, he brought the debate to the UN general Assembly and was joined by Mexico and Colombia, the two major US allies in the War on Drugs, for a call to revise the international treaties on illicit drugs.

As Perez Molina is actively trying to build a coalition for drug policy reform, he announced on Thursday a planned meeting with newly re-elected Hugo Chavez with legalization on the agenda. Venezuela is a major entry-point on the transit route of cocaine to the US through its extremely porous frontier with Colombia, and has often been a safe haven for Colombian narco-traffickers. However, the relationship between the Chavez regime and his cumbersome guests seems to be turning sour as violence has escalated dramatically in the country. Leftish Chavez joining right-wing Perez Molina in a coalition for drug policy reform might mollify the other members of the leftish Latin American coalition that includes Peru, Ecuador and Bolivia. Left-leaning Argentina president Kirchner might join as well. Uruguay announced in June its intention to legalize marijuana under state control and the proposal is currently churning through the legislative process.

The US being by far, the largest market for illegal drugs in the world, the marijuana legalization initiatives on the ballot in Colorado, Washington and Oregon take special significance in such a context. It is noteworthy that the US Justice Department has so far refrained from taking a position on these initiatives despite being urged by legalization opponents.

November 6 is likely to be a watershed moment for marijuana legalization and drug policy reform with the marijuana legalization initiatives standing very good chances in Colorado and Washington. Both initiatives enjoy wide support across the political spectrum ranging from the state democratic party to the GOP US Senate Candidate for Washington, Michael Baumgartner, or former GOP Congressman Tom Tancredo in Colorado. Sponsored by former US attorney John McKay and current City Attorney Peter Holmes, and with backing from the mayor and the entire city council of Seattle as well as the Seattle Times, the Washington initiative lines up the most impressive slate of main-stream backing and enjoys double digit margins in the polls. Curiously, in Washington and Colorado, the staunchest opposition is coming from the medical marijuana communities. The Oregon initiative, placing no restrictions on cultivation for personal use, is generally considered too radical and faces an uphill battle. A medical marijuana initiative, currently polling at a whopping 69%, could provide the icing on the cake with a landslide victory in Massachusetts.

A victory for marijuana legalization initiatives in the US would have momentous implications for Latin America and would place the federal government in an awkward position, caught between internal and external pressure for reform. It would certainly weaken its hands in its negotiations with its increasingly restive allies in the war on drugs. It might also give the needed impetus for the crystallization of a coalition of the willing and rally the support of the countries such as Costa Rica that have prudently stayed on the sideline until now.

The 22nd Ibero-American Summit, held on November 16 – 17 2012 in Cadiz, hosted by Spain and attended by Portugal and most Latin American countries will provide a good test of the effects of a marijuana legalization victory. Portugal and Spain having some of the most liberal drug policies in the world, this summit should offer a favorable environment for an open debate on drug policy reform. Scheduled 10 days after the November US election, it might embolden Colombia and Mexico to take more assertive positions. It may also present an opportunity for the budding coalition to grow some offshoots or support on the old continent.

Unknown is the potential reaction of the federal government to state legalization. While a lot depends on who will be the next host of the White House, the next president’s options might be limited, especially as a likely solid victory in Washington and a landslide medical marijuana victory in Massachusetts might diametrically reverse the political risk of marijuana legalization, with opposition to the issue becoming increasingly politically risky.

If the federal government chooses confrontation, it can expect a vigorous fight from the states. Already, the City of Oakland became on October 11, the first known jurisdiction to sue the federal government to protect its medical marijuana industry. Lawsuits are being brought in San Diego to reverse federal convictions in medical marijuana cases. There is no doubt that victory in November will embolden the states to resist federal interference with their marijuana policies. A corner will most likely be turned in the War on Drugs on November 6, 2012, a corner towards legalization.