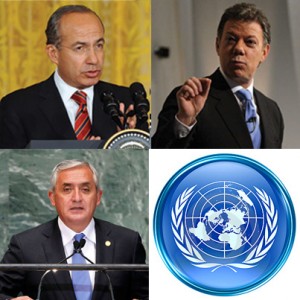 In a significant development in the rapidly evolving drug policy debate, the governments of Colombia, Guatemala and Mexico issued on Monday October 1 a joint declaration demanding the UN revision of drug policy. In their declaration, the three countries denounce the failure of the current prohibitionist drug policies and request “That the United Nations [] exercise it´s leadership … to analyze all available options, including regulatory or market measures, in order to establish a new paradigm that prevents the flow of resources to organized crime organizations.” The three governments “invite Member States of the Organization of the United Nations to undertake very soon a consultation process” and call for “an international conference to allow the necessary decisions in order to achieve more effective strategies and tools with which the global community faces the challenge of drugs and their consequences.”

Read the entire declaration in Spanish, and its English translation

In another development, the Mexican businessman Ricardo Salinas, head of the Grupo Salinas and of TV Azteca, advocated drug legalization at the annual meeting of the Association of American Chambers of Commerce in Latin America in Washington DC. This is quite significant because Salinas is one of the major backers of President elect Pena Nieto, who will take office on December 1.

It seems that we are witnessing the emergence of a Latin American coalition for drug policy reform led by Guatemala, Colombia and Mexico. The active support of Colombia and Mexico would undoubtedly change the balance of power and turn the tables on the US.

In this context, a victory for one or more of the marijuana legalization initiatives in November could be game changer, especially as the number of medical marijuana states keeps growing, most of them solidly democrats or democrat-leaning. If reelected, Obama and the Democratic Party might finally realize that they have more to lose than to gain in pursuing their current hard-line policies. Meanwhile, an internal challenge to the prohibitionist drug policy would seriously weaken the US hands in the drug policy debate with its Latin American allies.

Success is definitively within reach in Colorado and Washington, but you support is urgently needed. First, if you live in Colorado, Oregon or Washington, you must of course go to the poll. But if you don’t there are many ways to support, starting with donations.

If you order “World War-D” on our website http://www.world-war-d.com/ before November 1st, 2012, we will donate $5.00 to the campaign of your choice. Just follow the instruction in your order confirmation email to select the campaign you wish to support.

2012 will be marked as a turning point in drug policy reform. Be part of history!
Thank you for your support