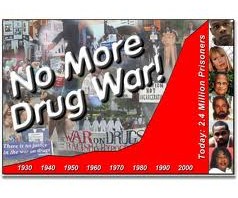 Speak up! Stand-up! Get involved!

I created this section to keep you informed about actions that I initiated or that I find worthwhile and potentially impactful. Feel free to comment on this post to alert me to actions you are promoting. Be aware that I mostly focus on global actions or actions with broad potential:

To find out more: http://vivario.org.br/en/proposal-hoping-to-reform-brazilian-drug-law-is-presented-to-the-house-of-representatives-with-over-100000-supporters/

Javier Sicilia and Mexico’s Movement for Peace with Justice and Dignity are leading the Peace Caravan across the United States this summer, calling for an end to the drug war. The caravan began in San Diego on August 12 and is visiting two dozen U.S. cities on its way to Washington, DC. http://www.caravanforpeace.org/caravan/ The caravan is currently in Atlanta, heading for Louisville, KY, and Chicago over Labor Day. The grand finale is scheduled for September 10-12 in Washington DC. Check the route and mark you calendar if you live in the US: http://www.globalexchange.org/mexico/caravan/route

Marijuana legalization initiatives on the November 2012 ballot in the US

Help make history, put your money where your mouth is, support the marijuana legalization initiatives in all three states, Colorado http://www.regulatemarijuana.org/, Oregon www.octa2012.com and Washington http://www.newapproachwa.org. You can also spread the theme song for Colorado prop 64 http://www.regulatemarijuana.org/news/listen-yes-64-theme-song. Each of these initiatives has its strengths and weaknesses, and none of them is perfect, but they certainly are a big step in the right direction and deserve your support.

Medical marijuana initiatives are on the November ballot as Question 3 in Massachusetts, and Arkansas. Question 3 has huge lead in the polls. The Arkansas Medical Marijuana Act is under far more pressure, polling at 47/46 and is being challenged by Christian conservatives groups. Arkansas could become the first state in the bible belt conservative South to pass medical MJ, although, admittedly, it is quite a long shot at this stage. Time for Bill Clinton to inhale?

Uruguay needs our support more than ever. Share on social networks and email. http://www.world-war-d.com/2012/06/22/petition-in-support-of-the-controlled-legalization-of-marijuana-in-uruguay/

Obama needs to hear from you. Ask him to leave medical marijuana alone: http://www.whitehouse.gov/contact/submit-questions-and-comments

Help the people fighting in the trenches:

Make a donation to Law Enforcement Against Prohibition (LEAP), the most credible drug legalization advocacy group in the world. Help support the amazing work they are doing. http://www.leap.cc/

To support a scientific approach to drug policy, please see the Beckley Foundation. The Beckley foundation opened a Guatemala office on July 3rd with the active support of President Otto Perez Molina.

The International Drug Policy Consortium (IDPC) is a global network of 82 NGOs and professional networks that specialize in issues related to the production and use of controlled drugs.

There are many other organizations well worth your support, such as the Drug Policy Alliance (DPA) and the National Organization for the Reform of Marijuana Laws (NORML), and many others that I do not have space to list here. Feel free to add them in the comment section below.

Stay tuned and keep up the fight. Thank you for your support.

Become a better informed activist and support global drug policy reform! I do not ask for donations, I invite you to order a book filled with valuable information.

If you agree with our views, please share this message to support our cause. Send this message to at least 5 of your friends, post it on social networks, on your blogs, etc.