The government of Uruguay announced yesterday that it will submit a proposal for the legalization of the sale of marijuana (possession and use of marijuana is already legal in Uruguay). The proposal was drafted by President José Mujica and his government and requires parliamentary debate before final approval. If adopted, Uruguay would become the first country in the world to establish a controlled marketplace for marijuana. The proposal already generated a vigorous debate on social networks. 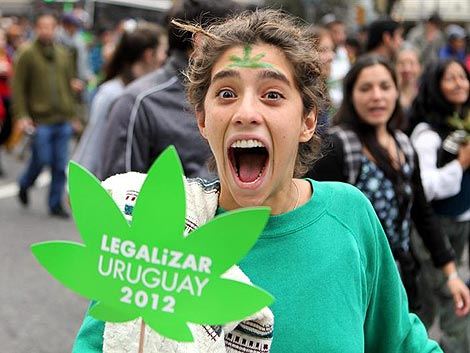 According to the proposal, marijuana will be legally available under government control through a user registry and subject to quality control and traceability. Users will be limited to a maximum of 40 marijuana cigarettes per month. The price will be accessible but taxes will be levied to finance addiction treatment.

The government’s objective is to combat insecurity and violence by separating the markets of marijuana and hard drugs, mainly coca-paste, and avoiding that the marijuana user be exposed to coca paste through his supplier. Located on a transit to Europe via West Africa, Uruguay has – been plagued by an explosion of crime and violence attributed to the trafficking and use of coca paste, considered as a scourge by the authorities.

Coca paste is an inexpensive unrefined precursor of cocaine obtained by macerating the coca leaves in various solvents including paraffin, benzene, ether, and sulfuric acid. It still contains substantial amounts of these highly toxic solvents. Coca paste is smoked mixed with tobacco or marijuana and produces a very intense and short-lived high similar to crack cocaine. Coca paste is extremely addictive and may lead to hallucinations, paranoia, aggressiveness and psychosis. As a result of the establishment of new transiting routes through Argentina, Brazil and Uruguay to Europe via West Africa, the use of coca paste has been raising dramatically in these countries since 2005. The use of coca paste and cocaine may surpass the use of marijuana in Brazil. Coca paste is devastating street-children populations.

Often dubbed the Switzerland of Latin America, Uruguay is a tiny country of 3.3 million inhabitants located on the Atlantic coast on the Southern border of Brazil and separated from Argentina by the estuary of the Río de la Plata.

Uruguay president Jorge Batlle was the first head of state to recommend legalization in 2000 while still in office. Mujica signaled his openness to the legalization debate while on the campaign trial in 2009 and reiterated this position since in office. Uruguay has been debating cultivation of marijuana for personal use since 2011 and its imminent approval has been repeatedly announced, but has evaded legislators so far.